NIGHT OF THE CREEPS AT BRIGHTON ASLYUM 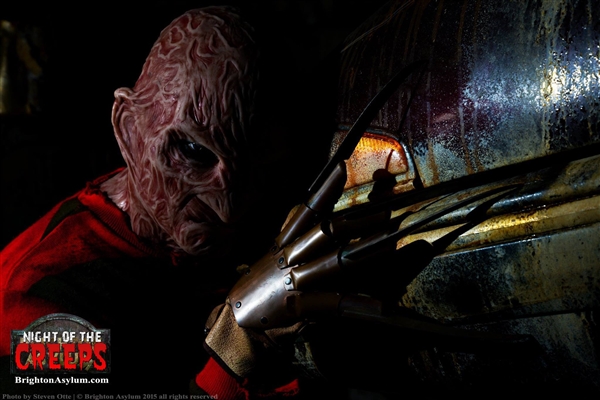 Welcome back for another installment of HH365.com. Last night the team took the very long trek up to Brighton Asylum for their One Night Only Night Of The Creeps Attraction.

This attraction brings all of your favorite Horror characters to life and throws them right into your face. This is something I always thought more Haunts should get on board with. Even if it is just one night. Surround the fan base with their favorite Murderers and Madmen. Torture them with the Villains of the movies that have made fans jump out of their seats for now approaching decades.

Well lets get to the review. The first stop at Brighton Asylum is The Tunnel. While standing in line to enter The Tunnel, we were handed fully automatic weapons. These were given to us to mow down the Zombie uprising that was terrorizing The Tunnel. Once we entered the building we were loaded into an elevator to take us down to The Tunnel. We were greeted in the elevator by a Southern Sheriff by the name of Hoyt. His job was to inform us that his nephew was looking for new faces to slice off and wear as his own. And at this point, I knew standing in the cold and the three hour drive was totally going to be worth every second of it.

This was our third trip through The Tunnel this year, as they did not change much of the design or decor of The Tunnel. They really did not have to. A lot of the Movie Maniacs fit right into the existing Facade. Brighton Asylum did a wonderful job using what they already have and mixed new characters into it flawlessly. From Historic Psychopaths to Modern Evil, The Tunnel brought it hard. Lets get to the scoring

After escaping The Tunnel, You are stripped of your weapons and head up to the door of Brighton Asylum. This was amazing because right out side of the entrance you are greeted by one of the little girls jumping rope in A Nightmare on Elm Street. Without saying a word she starts singing. 1,2 Freddy's coming for you, 3,4 Better lock your door. She continues with her song as she hands out the please touch necklaces. When she was done handing out the necklaces and finished her Nursery Rhyme she waves you on in and lets you know that Freddy is waiting for you.

The Night of The Creeps was the best attraction we have seen out of Brighton Asylum. And walking through the many corridors of the Asylum brought so many Movies we have all watched over and over again to life. In one case for the girlfriend it became a little too real. Having an already existing gigantic phobia of Jason Voorhees, This is what made everything so worth it. I am going to run through the scene. As you walk down a dark corridor you see Mr. Voorhees for a split second, then he disappears behind a door. Well, as you turn the corner. Mrs Voorhees is standing there yelling at you for letting her little boy drown. As you walk passed her you hop on a little bridge over looking what would be Crystal Lake per say. Well that is where my night went from good to great as Jason Voorhees jumped out of nowhere and literally tried to drag my Girlfriend over the bridge into his lake. This prompted a scream from her that probably woke at least 10 dead people. This was the biggest scream I have ever heard out of her. AMAZING JOB! That 15 second interval made the cold and the trip worth it.

Adding many movies into the Asylum, they did a fantastic job recreating New and Old Horror and bringing it to Life. Here are the Scores for the Asylum.

Not that this will be much surprise, but here is what we scored the Night Of Creeps Attraction at Brighton Asylum.

That is our coverage from The Night Of Creeps. Stay Tuned this week as we have FINALLY wrapped up our Award Winners for 2016. With Transworld coming up and all of the haunts looking forward to next season we wanted to get our Awards finalized. These will be posted by the end of the week to see who was BEST OF THE BEST FOR 2016. Stay tuned and thanks for reading.
Posted by Halloween Haunts 365 at 9:29 AM