We will wrap up our Preview coverage of Bloodshed Farms with the interview we did with a good dude that is an Actor and Builder of the Hellsgate Asylum. One of the many Re-done attractions we are looking forward to on October 1st.

Yes its coming! All of the hard work is culminating towards an amazing September and October with some November. We are set up right now to Review 7 Haunts with more in the works. We have been working hard as a team to come up with a definitive scoring system for these Haunts. Stay Tuned for Details coming.

Back to Straight Jacket Sam! 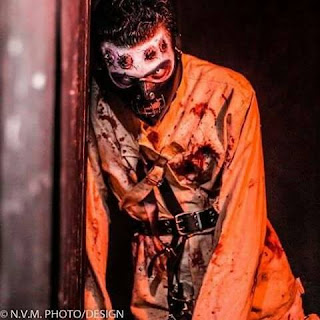 Look at the Outstanding Detail to the Picture I borrowed from Bloodshed. It is their picture they get all the glory. No stealing here!

When Jim and Clark introduced Halloween Haunts 365 to Straight Jacket Sam, I knew right away we needed to talk to this guy. Any time I see someone with a Leatherface Tattoo, I know that I have to talk to them. That we are connected already in a club of  Horror Movie Love.

Anyway, Sam was a really awesome guy to get to interview. Started in the Haunt Industry in 2013. Started at the Haunt "Corner of Chaos" then while waiting in line to get into an attraction, applied online to work for Jim and Clark.

With the grand plan of one day opening his own haunt, Straight Jacket just constantly learns every day on the Ins and Outs of the Haunt Industry. Admitted to completely sucking his first night, but always working on his craft has really dialed it in. I would say so since he has worked in now 5 Local Attractions!

Straight Jacket worked hard and became fully adaptable. Which would limit a ton of haunt actors out there. With the ability to act in any haunt theme or idea. Sam loves what he does because all in all it becomes Therapy. He loves to be able to just scream and vent and go nuts while its completely needed in a haunt. He is able to do what you can not do in "normal" society. Gets to vent a lot of pent up frustrations nightly.

We asked Straight Jacket Sam what was his favorite part of working for Bloodshed Farms. He was not able to place just one thing. He really enjoys the Family the team becomes during the build and night to night. He loves perfecting his craft to really nail that Scare! He loves watching the Giant Puzzle coming together for A huge show.

Just like everyone else we met that day, Straight Jacket Sam was hard at work wiring speakers for the Hellsgate Asylum. So not only do they work hard in the offseason but even when its go time!

Well that was our conversation with Straight Jacket Sam. Make sure you head into Bloodshed Farms to see him. He will be waiting for your soul in the Hellsgate Asylum Attraction.

Thats our preview for Bloodshed Farms. Thank you all who let us come out and pester you with question after question.

And a Big Thank you to everyone has visited this site. To have over 3,000 views in only August is Amazing. Thank you all so much. We want to provide the Haunters, Actors and Fans with Realistic Reviews of where they should head this year. And Bloodshed Farms has really peaked our interest. So if it caught our eye, we know you will love it so hop on to the brand new AMAZING website they just rebooted. Click herewww.bloodshedfarms.com