Tonight we will go over our interview with....GRIN AND CHEEKS! 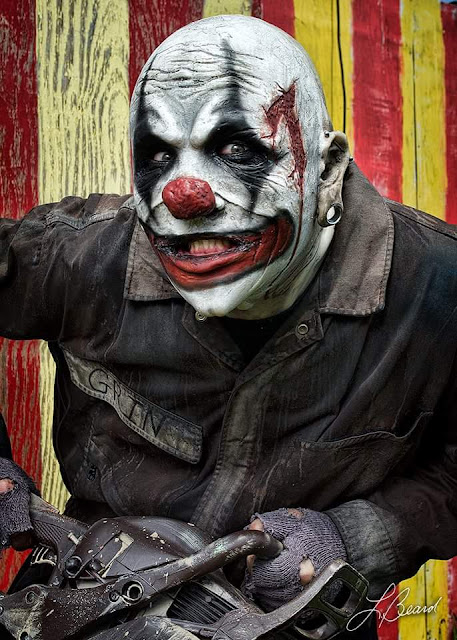 Meet Grin. Grin works as an actor and builder and everything else at Bloodshed Farms. Hell he also got Halloween Haunts 365 connected to Bloodshed Farms. When I finally met Grin he was actually painting the Clown O Phobia Attraction. Just to show you the dedication of the Actors of Bloodshed Farms.

Along with Grin, we got to talk to Cheeks. 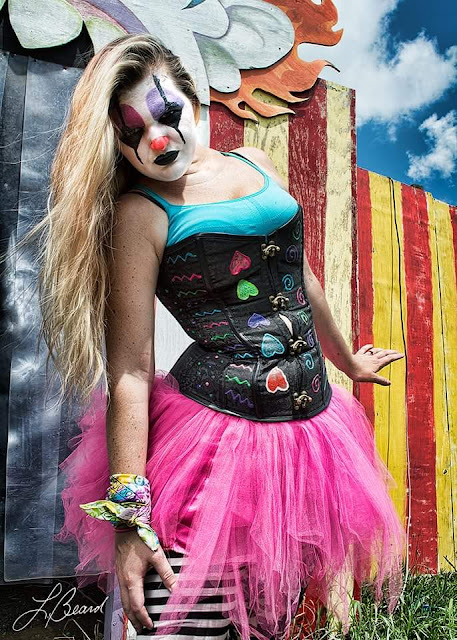 To get started with out interview with Grin and Cheeks, We think a little backstory is needed.
Grin is a member of The Circus Rejects and a HUGE supporter of Fried Oreo Cookies. A group of clowns that are into everything. From Tattoo Conventions to Beer Festivals. 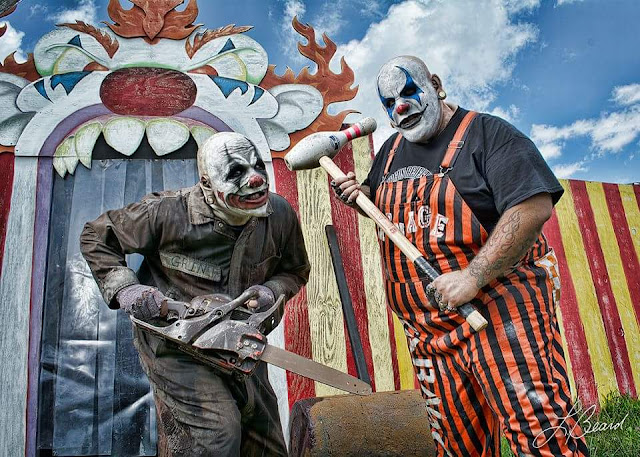 Here are the Circus Rejects. Grin and Karnage. This all star clown group was created when Grin and Karnage were in Clown School. By pure chance, Both of them were kicked out of Clown School on the same day and happen to bump into each other in the parking lot and became instant best friends. Grin got the boot for making inappropriate balloon animals and in the classroom across the hall, Karnage was caught in the make-up room eating all of the grease face paint. Who thought that clown school would be so hard??? After that history was made and the Circus Rejects were born and now live in the Clown O Phobia Attraction Only at Bloodshed Farms.

Now to the interview with Grin and Cheeks.

We did not format this interview but had an awesome conversation with Grin and his history in the Haunt Industry. Believe it or not but Grin has been working on Haunts since the age of 5 years old. His parents met at a Costume Party and together were completely into Halloween and Home Haunts and he got involved at 5. Just has not stopped Haunting since being introduced.

This is Grins 4th year at Bloodshed Farms. Meeting Clark at the Haunted Prison, they started working together once Clark moved on to Bloodshed Farms. Where he actually met his Fiance and Future Circus Reject Cheeks. Cheeks backround started with Great Adventure Fright Fest as an actor. She came to Bloodshed Farms, Met Grin and now also roams the crazy paths of Clown O Phobia.

These two were very dedicated Actors and important members of Bloodshed Farms. We had a blast talking to these two as Jim was wondering why they were not working still??

Be sure to look for Grin, Karnage and Cheeks in Clown O Phobia, Only at the Bloodshed Haunted attraction

Visit www.bloodshedfarms.com for more details. Like scheduling your visit right now. Put it in the Iphone/Droid whatever you use. 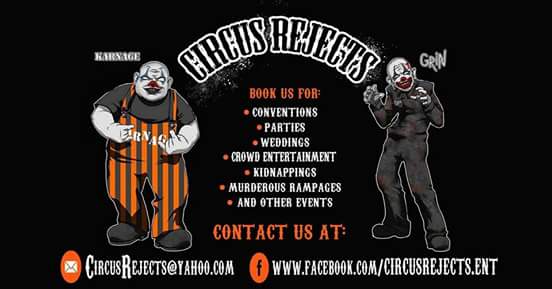 Thanks to Grin, Cheeks, Jim, Clark. We have another interview going up tomorrow or Friday with Straight Jacket Sam, Feel free to come on back and read more interesting conversations and Haunt Facts. See you then!
Posted by Halloween Haunts 365 at 9:33 PM