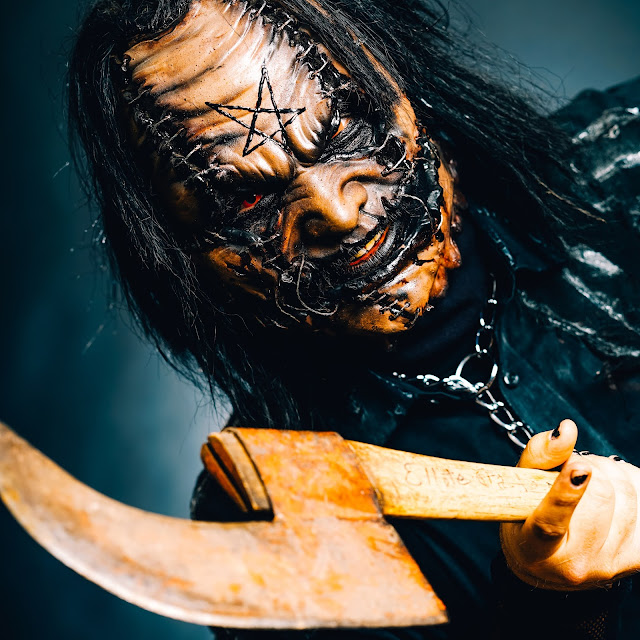 Welcome back to another episode of HH365! Today we continue some more Interviews with these talented Haunt Actors. Today as you can see from the title, we have SkitzCult! Let's go!

1. How long have you been Haunting for?
I have been working at Field Of Terror for about 4 or 5 seasons and I worked The Dark Carnival for half a season.

2. What brings you back to haunting year after year?
The atmosphere. I love haunts and horror. So just getting into character and being a whole different person for a night is amazing. I am very awkward in person, so to put the mask on and get to let it all out is an amazing feeling.

3. Where did you start Haunting?
I started at a charity haunt in NJ with my mom for one night. They gave us sheets and put us near a lake and we were supposed to be the lake spirits. But, my first legit haunt was The Dark Carnival and that’s what really got me hooked.

4. What is your favorite part of a night in the Haunt?
My favorite part is when I first get into my scene. The other people in my scene, we just sit there and bullshit for a few minutes. Then I get my music on and really get into character and to watch it go from light to dark and see the flames come on at the front of the corn. we then hear the person at front let the first group in. It just gets the adrenaline pumping.

5. What is the worst part of working in a Haunt?
It’s a mix between the rude customers and the long weekends. I work a full time job 40+ hours a week so in October I don’t get a single day off. Also, not being able to do stuff during the Halloween season.

6. What is your all-time favorite scare onto a customer?
That’s a rough one. I have checked off a lot of stuff on the bucket list of scares. But the best one I had was when I came rolling out of the corn with my chainsaw a group jumped ran (knocking down half the damn corn) and one girl froze, I saw her eyes roll to the back of her head and she dropped. Like body stiff white eyes dropped and was not responding. We called the EMT and her friends came back grabbed her bags and ran when they heard the EMT and Police were coming. They did some stuff to her and she eventually came back into it and was fine. But oh my god was I freaking out at first. All the first responders wanted to take a group photo with me after because they thought it was funny as hell but I thought I killed someone.

7. What is your Favorite Haunted Attraction outside of your Haunt?
That’s also a tough one because we have some great haunts on the east coast but id have to say Bloodshed Farms. I got to guest act there for a weekend and there crew of actors and managers there are amazing. Everyone was so welcoming and you could really tell the comrade there. Specially right before they go out  to there spots for the night and there doing there chants that got the blood pumping. Also I Love Scary Rotten Farms, I always try and go there on an off night!

8. What is your favorite Theme in a Haunt Attraction?
I love them all, I love seeing what new creative things people can come up with. If I had to choose I would say anything that involves a room where it looks like the a psycho brings his victims to torture. Specially when its done really detailed and good. Like and old TV in the room playing something weird. Just dirty smelly blood soaked chair with a table of knifes, pliers and stuff like that. Definitely if the rooms got some grind or doom metal playing adds to my liking factor.

9. Do you have further plans with the Haunted Attraction Industry?
Absolutely hope so. I have devoted a lot of time into being a scare actor. When trainers do love streams I am always in there learning. I have been to a few online seminars for different things in the industry. So i would definitely love to be able to take this further. I have met so many great people already and when its not haunt season I am just itching to get back.

10. Where does your inspiration for your Character come from?
It comes from me I guess. Like, my outfits.  If you saw me outside as normal person I wear the same clothes hahaha, like my vest I wear as skitz is my everyday vest in real life. I am big into punk and hardcore so vests studs patches are all that I incorporate into my character because its what i am comfortable in and when you are comfortable with your look I feel it enhances your mood and really gets you into character. My personality in Skitz is also just my inner personality. I was bullied a lot when I was younger and my job I deal with a lot of snotty upper class folks. So I take all that rage and bring it out in my character. So it’s a world wind of personalities that comes out between me being happy to raging to laying on the floor eating dirt talking to myself.(yes I did that and everyone walking by questioned If I was actually mentally unstable haha)

11. What are you most looking forward to in the 2020 Haunt Season?
Just getting back out there doing what I love! I am hoping to get to guest act at a few more places .

12. Do you expect Haunt Season 2020 to be vastly different than other seasons?
100% with everything going on I feel its going to be a lot different. Maybe a lot of people wont come out due to worrying about getting sick or whatever. But people come to haunts to escape the real world. So if were allowed to open this year I will being giving 110% because that’s what everyone needs after this. Some entertainment and just a night to escape the bullshit.

13. How long does your make up setup take per night?
Usually about 20 minutes to put my contacts on with my black out make up on. The thing that takes the longest is undressing to my knee caskets and knee pads and then put my costume back on.

14. How often do you work on your Character?
All year long. I am always adding and removing things. I don’t think anyone is ever 100% happy with their character. There is always something new you can do to enhance it.

15. What do you do for a living outside of haunting?
I work the front office at a doggy daycare and boarding facility. So, when you walk in the front door you see my smiling face haha. If only they’d let me come as Skitz one Halloween that’d be awesome

Another Fantastic Interview from another Talented Actor! That is all we have for you today at HH3675! Keep it here to HH365! Where Every Day Is Haunt Season!