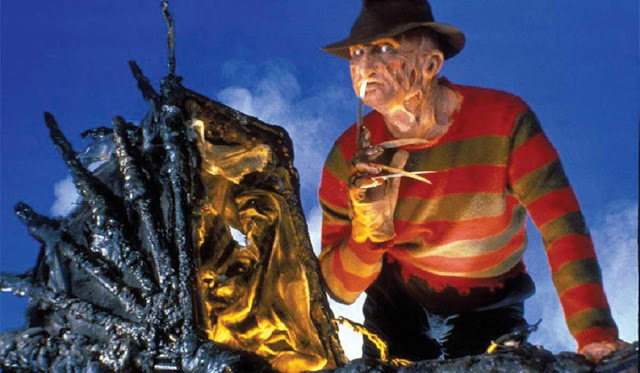 Welcome back to another edition of HH365! Today we continue our Fun Facts Friday with A Nightmare On Elm Street Part 5, The Dream Child. This very campy movie is sure to have some interesting facts tied to it but it is still Freddy Krueger! So this movie still gets our Respect! Let us get to some interesting and lesser known facts from the movie.

1. When Jacob Tells Freddy "Schools Out Krueger." It was a replacement line for something the Actor, a minor at the time could not say. The true line was "Fuck You Krueger".

2. Alice is the first Character on Elm Street with a Child.

3. Stephen King and Comic Book Writer Frank Miller were offered the job of writing and Directing the film.

4. This was the lowest grossing film of the Franchise even though Robert Englund called it a Full Success.

5. The Character Mark was designed after the Director Stephen Hopkins. Hopkins being an avid Comic Fan.

6. H.R. Giger and his work on Alien was the inspiration behind the "Need for speed!" Scene with Dan and the Motorcycle.

9. The Final Nightmare film until Freddy Vs Jason to include the Jump Rope kids and song.

10. Before "Alice" or Amanda Kruger is raped you can see Robert Englund out of make up quickly.

Well those were ten fun facts about that flop of a movie. I will always still watch it as it did still have some great deaths and nightmares. But that is all we have for you at HH365 today! Make sure you keep it here to HH365! Where Every Day Is Haunt Season.
Posted by Halloween Haunts 365 at 10:56 AM