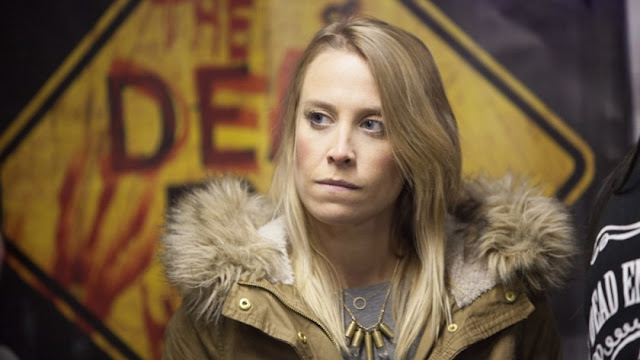 Welcome Back Everyone to the next installment of HH365! We have been massively busy reviewing every Haunted House we can get to so some of our usual episodes have to sit on the back burner because Haunt reviews will always come first here at HH365! Let us get to our next movie review.

Story:
"Recovering from the trauma of being kidnapped last Halloween by the Blue Skeleton - a group who take "extreme haunt" to another level - five friends decide they must face their fears in order to move on. Heading back out on the road to visit more haunted house attractions, signs of the Blue Skeleton start appearing again and a new terror begins."
This sequel starts where the first film left off. We see Brandy in a coffin, about to buried alive, when a cop shows up. What we don't see is Brandy taken out of the coffin and placed into the trunk of a car. The members of the Blue Skeleton crew open the trunk, leaving Brandy on the side of the road all alone.
A year later, Zack and Bobby show up at Brandy's front door with a camera. They are trying to convince her to go do a new haunt tour. This time they are getting paid to rate haunts, but she refuses to go. The guys go on their own for a few attractions, but they quickly realize they need Brandy to make any real money. Eventually they talk her into coming along.
It isn't long before the group start hearing of an extreme haunt called Hellbent. Is this one just a haunt? Or are they really in danger all over again?

Acting:
Once again, the acting in this film is great. These five actors have the best on screen chemistry. You can really tell the tension this group has now, because Brandy is very on edge the whole film. The acting is the best thing about it.

Fear Factor:
I'm sorry, but there just isn't anything scary about seeing these characters do things like haunted hayrides, zombie pub crawls, or zombie 5k runs. It is just time filler, and too much of it, in my opinion. There is zero reason for this movie to be an hour and forty something minutes. The "real" horror doesn't even begin until an hour and fourteen minutes into the movie. I will say, the final haunt in this movie is more extreme than the last. We actually get some great practical make up in this installment (that isn't part of the haunt). That's just about all it has going for it when it comes to "Fear Factor".

Overall:
After re-watching these films, I won't be visiting them again for a few years. I was bored. I hate that. I remember liking this sequel when it came out, but now it just doesn't hold up for me. Besides being bored, they destroy these characters by the end of the film. Without spoiling anything, I'll just say that I don't think they knew how to end this movie. I really don't like what they chose to go with. I just don't believe these friends would do what they did to each other. I would say see the first movie, but skip this one. It's passable.

Next week, I'm going to be reviewing "The Funhouse Massacre" (2015). "Six of the world's scariest psychopaths escape from a local Asylum and proceed to unleash terror on the unsuspecting crowd of a Halloween Funhouse, whose themed mazes are inspired by their various reigns of terror." This is a super fun haunted attraction horror film and it stars Robert Englund in a small role. Check it out and join me next week for the review!

Another Great review coming down the pipeline. We are now in the High Gear of Haunt Season. We like to keep reviews up for two days so the Actors and Fans can have plenty of time to be the headliner at HH365! We still have a ton more content coming from across the country, So Keep It Here At HH365! Where Every Day Is Haunt Season!