Tuesday's With TheMovieVlog. "Doomed, Your All Doomed!" 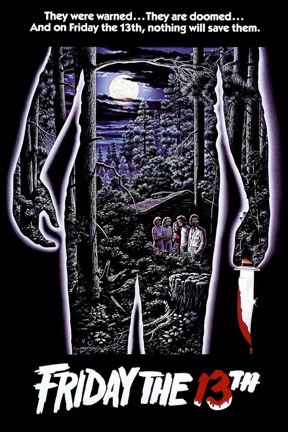 Pic courtesy of Paramount/New Line or whoever owns Friday The 13th at this moment. This is has been a Licensing Nightmare for quite a few years but hopefully they figure it out so we can move forward with more! Lets get to the Inaugural Tuesday's With TheMovieVlog.

Story: "A group of camp counselors are stalked and murdered by an unknown assailant while trying to reopen a summer camp which, years before, was the site of a child's drowning."
The story line is a very simple one, but it worked. The film opens with two young camp counselors sneaking off for a quick hook up, when they are caught by someone that they clearly know. The first two kills of the entire franchise might be a little lame, but it breaks into the iconic score that we have all come to know and love. After the opening credits, we skip ahead to Present Day. We are introduced to Annie. She is on her way to Camp Crystal Lake where she has been hired as the cook. She gets a ride from a local named Enos, who gives her the back story for "Camp Blood". He tells Annie about the two kids murdered (the ones we saw at the beginning of the film) and about a boy drowning the year before that. He urges Annie to quit her job and not go, but she isn't easily shaken. Now we skip ahead to the campsite where we meet the rest of the characters. The teens are preparing the camp for kids to come, and we get quite a bit of character development in these scenes. I find this super charming. These characters are just normal teens. They aren't all super models or dumb jocks, which makes them way more relate able. As the story progresses, the teens start getting picked off one-by-one by an unseen killer.

Acting: I feel like all of the acting in this film is pretty decent, especially for the small budget that the film makers were working with. I still can't help but favor Adrienne King as Alice as our final girl. She gives such a convincing performance in the third act. She has to be completely distraught and in panic for the last 30 minutes of the film, and she pulls it off. Of course, the biggest highlight of the film is our killer Pamela Voorhees, played by the late great Betsy Palmer. Palmer's quick descent into madness played out so well. She went from the little old lady that you would bake a cake with to crazy psycho killer within one scene, and it was freaking awesome. I have no complaints about any of the performances in this film.

Fear Factor: I guess what we really need to ask ourselves is... does this film hold up? This film is very close to being 40 years old. I know for sure that 13 year old me was scared to death the first time I watched this film back in 2006. The biggest complaint I guess I have is not with the film itself, but with the bluray transfer. Before seeing this film on bluray, I couldn't clearly see prosthetics on the actor's necks/faces during the kill shots.  That's not really the films fault though, because on VHS you couldn't see all of the fake necks. I would say that the kills hold up, even with the movie magic being a little bit ruined. I think the special effects (done by Tom Savini) were incredible for the time that this film came out. Friday the 13th was clearly piggy-backing off the success of Halloween (1978), which had barely any gore at all. They took risks with this movie and it paid off in the end. Besides the effects, Pamela Voorhees was terrifying. Her performance is one of the greatest in horror film history and I do not question if it holds up. It does.

Originality: As I said before, this film was playing off of the success of Halloween. It used the slasher formula, but that doesn't mean that it wasn't original. In Halloween, there was zero question who the killer was. Friday the 13th kept us wondering until the last 20 minutes of the film. Having a mystery killer really played to the films advantage. We were constantly guessing and the reveal definitely wasn't disappointing. Besides that, this movie created a huge sub genre of Camping/Woods slasher films. We can thank Friday the 13th for other fantastic classics like Sleepaway Camp and The Burning. It might have been another slasher film, but that didn't stop it from being one of a kind.

Overall: I understand why some people might find this entry to Friday the 13th to be a bit slower than the rest of the series, but I find it very charming. There is just something so special about this film. It was the start of it all. Something that all horror fans would grow to love. You can't deny it that. Halloween might have been first, but Friday the 13th took slashers to another level. It still makes such a massive impact in popular culture even to this day. Pamela is and will always be one of the best (and most underrated) killers in horror film history. This film also has one of the best scares ever brought to film in the very last lake scene that was shot with Alice. You know the one. I don't have to tell you about it. In conclusion, I love this film. It still remains to be my favorite horror film.

And for the Overall:

Thank you all for reading! Make sure to follow me on Instagram for daily updates!
IG: @The_Movie_Insta.

Can we say that Shelby hit this pitch out of the park? Boom! Nailed this movie 100%. We chose to start with the Friday the 13th series because this Haunt Season will include at many locations a Friday the 13th night! The First confirmed Haunt we have seen so far is Brighton Asylum. Leave it to them to make it happen!

To continue on what Shelby has said. I will add that I completely Agree with Her on this movie. Friday the 13th may have been after Halloween, but I believe it was a stronger force starting the "Slasher" Genre.

I think this was a huge success for Tuesday's with The_Movie_Vlog. We will have updated scoring for the Movie Reviews coming soon. Thanks Ivana! Ha, Follow our Designer at @backfatbettys on Instagram.

That's what we have today! We still need about 45 more states of coverage! What are you waiting for! Jump on the Bus now! Until next time!
Posted by Halloween Haunts 365 at 8:36 PM