Today we will recap Ghost Ship. A Haunted Attraction in Wildwood, NJ. This attraction was built on the middle pier of Moreys Piers Amusement Park. We love going in because where else can you enter a Haunt in the middle of July!

Ghost Ship is modeled after something that does happen once every so often. Ghost Ship is a term for a ship that is discovered to be just drifting along in a sea where the entire crew has disappeared. History shows this has happened in the past. Or Ghost Ship could mean that other ships have seen a "Specter Ship". A ghost that has taken a ship form. So both are equally spine chilling and creepy.

Well lets get to the Haunt. 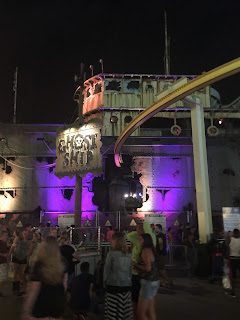 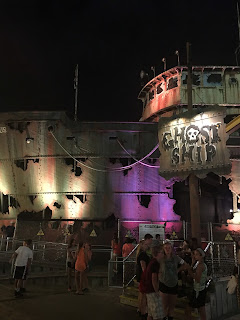 When you walk into the Ship shaped Haunt Attraction. You enter a room where there is a video playing explaining the premise behind what happened on this ship. Then the door slams open and you begin your journey.

Design: We really enjoyed the atmosphere as the design, lighting and originality really matched the top dogs in the Haunt World. For what is basically a ride in an amusement park they spared no expense when it came to every room. Every room is designed like different rooms of a ship where something bad has happened. One room is a Control Room another is the Infirmary and so on. Great work went into the lighting in this haunt. Every room was lit the way you would picture that subject matter for whatever room you go into. Makeup of the actors was another plus. Great detail to a ship crew. And no two makeups were the same. Which was surprising since this is open for close to 5 months.

Fright Factor: We rated this as a 6 out of 10. Dealing with bigger haunts we are probably desensitized to smaller attractions. If you look at the photo below you can see people more then happy to escape the ghost ship. 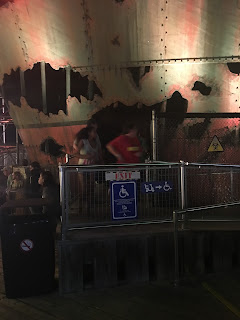 Really do not want to pick apart this Haunt since really it is only a ride on the Amazing Wildwood boardwalk. But our opinion was that it needed more actors. Sometimes you are walking for a while with nothing. Plus you could usually tell when someone was going to jump or see them prior. Kinda killed the startle effect.

All in all we enjoyed the Haunt. Little pricey for a ride but still cheaper then any of the Haunts. Plus when your fiending for a Haunt in the middle of the summer, This will be the only place to go. So for Halloweenhaunts365, We recommend checking this out.

Stay tuned for our Preview of Field of Screams coming next week! We hope that you all tune in for that to see whats new!  See you soon!
Posted by Halloween Haunts 365 at 11:35 AM